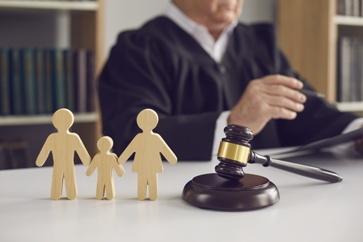 Divorce is never easy for separating spouses, but it can be even more difficult for minor children. Kids are often shaken by the reality of their parents living apart, unsure where they will live or what their future will look like. If you are beginning divorce proceedings, it is vital that you know the laws regarding child custody and prepare to make your case for your parental rights in court.

What Kinds of Child Custody Are There?

Custody types in divorce cases may include:

How Is Child Custody Decided in Virginia?

Virginia family courts recognize the hardships placed on children in a divorce, and look to provide living situations that will provide assurance and stability in the period following separation. The primary factor in awarding custody is which parent, environment, and arrangement is in the best interests of the child.

The judge is required to consider a list of factors before deciding on custody, including:

What Are My Parental Visitation Rights?

Do I Have to Pay Child Support?

In most cases, the non-custodial parent of a minor will be ordered to pay child support. The amount of support payments is based on a formula that considers childcare costs as well as potential contributions to the child's welfare. Factors that may be used to calculate child support include both parents' incomes, the number of children, child(ren)s health insurance costs, childcare costs, and support payments made by another parent for a previous marriage.

Can Custody and Child Support Determinations Be Modified in the Future?

It may be possible to change certain factors in a custody arrangement, including the custodial parent, amount of child support, visitation rights, and spousal support awards. However, these are typically only granted if one or both parents' life circumstances have changed significantly since the initial custody decision was made.

In order to petition the court to modify an existing order, you must be able to demonstrate that you or your ex-spouse has seen a material change in circumstances and that the proposed change is in the best interests of the child.

Some examples of a material change in circumstances could include:

You Need James Short on Your Side in a Custody Case

No matter what your goals are, James Short works tenaciously to get the agreement you want. Don't leave something as important as your child's future up to the court! Call or contact our office today to learn your next steps.