Uncontested vs. Contested Divorce in Virginia

Most divorces are based on some kind of disagreement. Whether it is a general lack of agreement about what you want in life or a fight over a betrayal of trust that cannot be forgiven, divorces happen because couples can no longer get along. However, depending on how well you can cooperate in the divorce 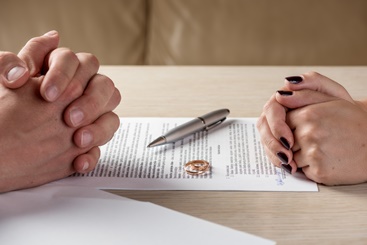 process, you could have a much easier, quicker, and less costly dissolution than if you cannot reach an agreement about the terms of the divorce. In other words, you can either end your marriage with a fairly easy uncontested divorce or with a long, drawn-out contested divorce. We explain each kind of divorce will unfold as you proceed.

What Is an Uncontested Divorce?

It might seem strange that a divorce can be uncontested—meaning there is little conflict or disagreement. After all, your marriage is breaking up over some kind of conflict, right? However, when a divorce is uncontested, it simply means that both partners want to get divorced, and they can reach an agreement about the key elements of a divorce, including:

In an uncontested divorce, there can still be counseling, mediation, and discussion in order to reach an agreement about these terms, but each partner must be willing to work with the other to finalize the terms.

An uncontested divorce in Virginia is usually also a no-fault divorce. That means that neither party is accusing the other of infidelity, theft, abuse, or other grounds. In order to achieve a no-fault divorce, the parties must have been legally separated as follows:

Once you have been separated for the required amount of time, you can simply file divorce paperwork with the local circuit court. Most uncontested, no-fault divorces start with a legal separation agreement that spells out the terms of the separation, outlines a custody arrangement, and settles finances. For this reason, the actual divorce proceeding is fairly simple. Even with an amicable divorce, it is important that you have a strong legal advocate on your side.

A Contested Divorce Can Be an Ugly Battle

A contested divorce is one in which the parties cannot agree on the grounds for the divorce and/or on any significant element of the divorce. The process is much like any other court proceeding—each party will present their arguments in court, and a judge will make a decision based on their arguments. The points being contested are usually:

Just like other kinds of court cases, each party will present evidence, provide expert witnesses, and give testimony before a judge. This process is often emotionally and financially very costly. It is essential that you have an experienced divorce attorney on your side.

When you first decide you want a divorce, you might not have any idea whether it will be contested or uncontested. You could even end up in a situation where your spouse refuses to cooperate at all. The sooner you consult an attorney, however, the more likely it is that you will achieve the result you are hoping to get. When you work with the team at James E. Short, PLC, you can be sure we have your best interests in mind as we develop a plan. No one will protect you during a divorce like your own lawyer will. Reach out to us as early in the process as possible.